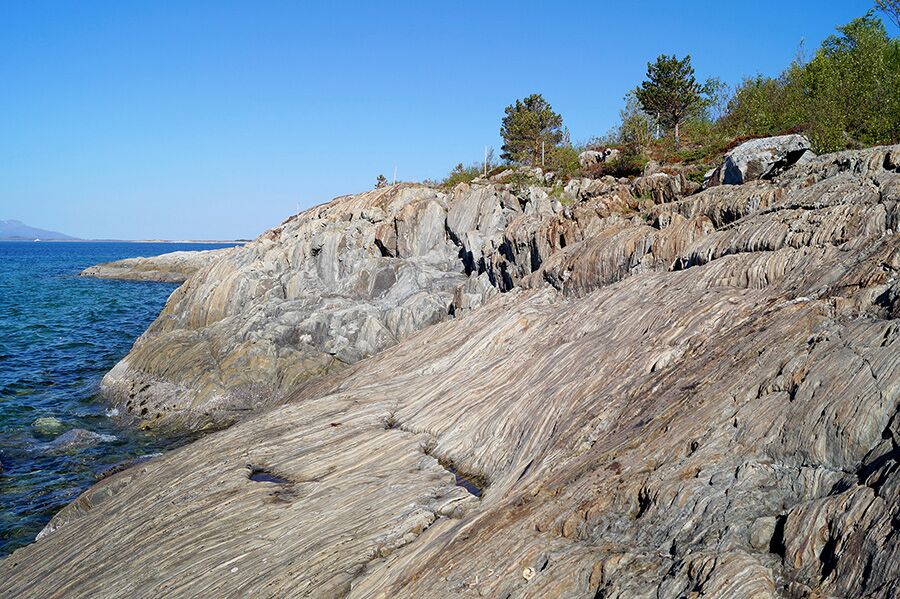 The Andalshatten Batholith is particularly significant due to the display of large km-scale screens and small xenoliths of metamorphic sedimentary rocks that were split away from the host rock and included in the granodioritic intrusion. The large screens form a ghost stratigraphy reflectig the host rocks prior to intrusion.

At Vollvika, the contact relations between the batholith and the rocks it intruded are readily observed along wave-polished coastal outcrops. Large and small wall rock xenoliths were broken apart and injection of magma occurred along weak zones in the metasediments (i.e. contacts between layers) and brittle fractures. In places, xenoliths were partly assimilated by the granodiorite. It is also clear that the metasediments were folded before intrusion of the granite. After being included in the granodiorite, new ductile structures developed in the xenoliths.

The Vollvika locality displays spectacular “school-book” examples of the mechanism of folding and cleavage development. Different types of dykes cut across the granodiorite and inclusions. Thus, the locality represents a frozen picture, 440 million years ago, of the relative timing of events that took place at an early stage of the Caledonian orogenesis.

This site has so far only been of interest to geologists, but we see a great potential for tourists here. The site is close to the road, and it is a nice walk close to the sea. The geological features are well visible.