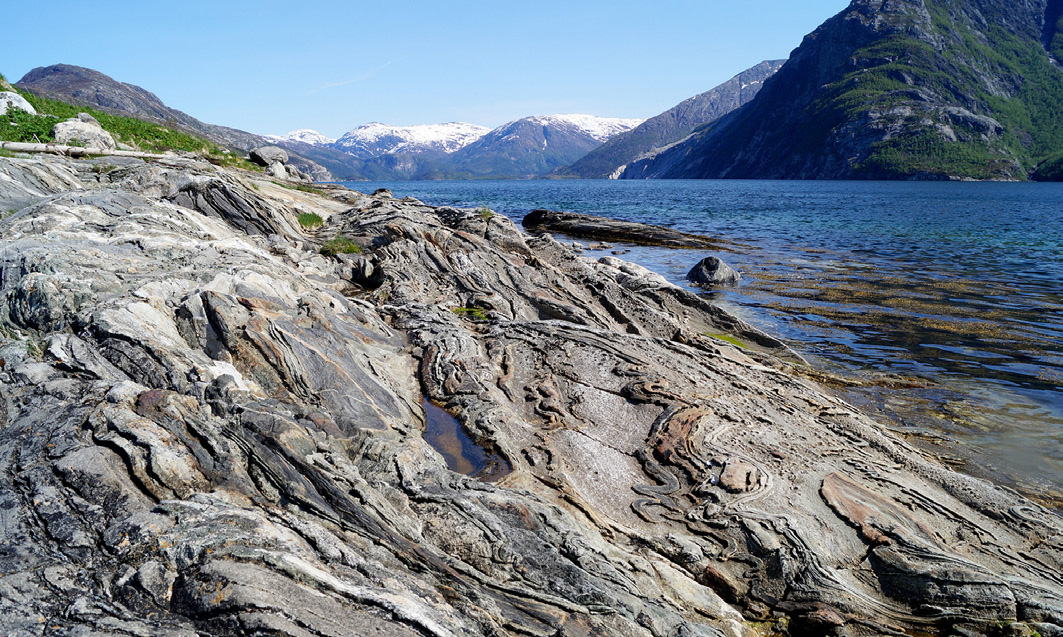 By the resting place at Tosenfjorden, coastal outcrops expose banded and folded migmatites (rocks that have suffered partial melting) and calc-silicate rocks. These rocks belong to the Upper Nappe of the Helgeland nappe Complex. The dark bands of the migmatites composed of biotite (mica), feldspar, garnet and quartz. The light colored bands are mostly quartz and feldspar. Cross cutting dikes of leuco-granite.

Research has revealed that the migmatite formed 480 million years ago at temperatures greater than 500°C and depths in excess of 20 km. This provides a link of the Upper Nappe with the Hortavær Nappe far to the west. At low tide, tonalities, including the minerals feldspar and quartz, can be observed to have intruded the migmatites. These tonalities contain dark gray inclusions of irregularly-shaped diorite, another igneous rock that is composed of feldspar, quartz, biotite and amphibole.

These distinctive igneous rocks form part of a suite of rocks studied along well-exposed road cuts along highway 76 a few kilometers to the southwest that have an age of 432 million years. They share affinity with rocks presently exposed in east Greenland and were subsequently rifted apart during the opening of the Atlantic ocean beginning about 60 million years ago.Thus, the site display important evidence of having suffered deep burial and partial melting.