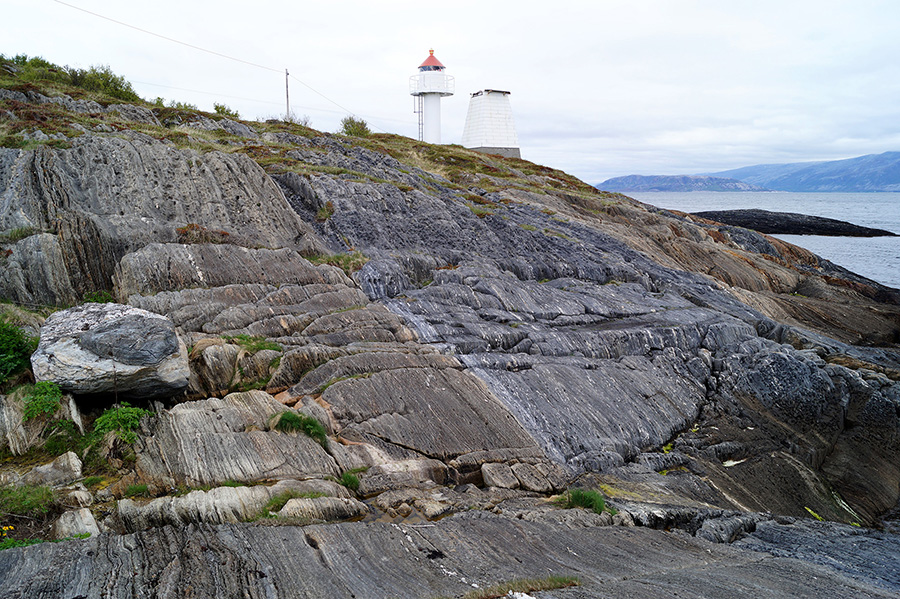 The island of Ylvingen has an interesting geology. Most of the island to the west consists of medium-grained biotite granite, locally with K-feldspar phenocrysts. The granite is well exposed around the WWII German artillery post (non-geological site V2-9). In general, the granites are massive, however, strong fabrics are locally present, especially close to the contacts with the metasedimantary host rocks. Garnet is present in the biotite granite in the northern parts of Ylvingen. In the same area, a small body of dark grey diatexitic migmatite crops out.

A 0.5 km wide zone along the east coast is underlain by metasedimentary rocks that are part of the S-T Nappe (Helgeland Nappe Complex): metapelite, metagreywacke, metaconglomerate, calc-silicate rocks, and marble. The metasedimenatry rocks are strongly foliated and the foliation is parallel to isoclinal folds. Despite strong deformation, sedimentary structures such as graded bedding and channel fill deposits are common in this rock unit.

The granitic rock, which is part of the Bindal batholith (or Vega granite), intruded the metasedimentary rocks around 475 Ma. This is typical for the Vega archipelago, where the many of the islands are underlain by granodiorite and biotite granite that intruded into clastic and carbonate metasedimentary rocks.