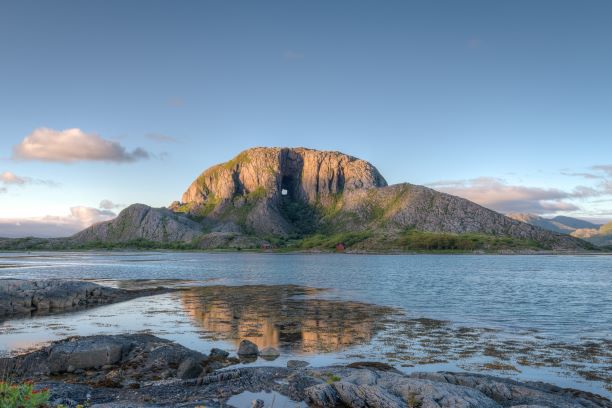 Torghatten is one of Norway’s most iconic tourist attractions, known for its spectacular hole through the mountain. The hole is a marine abrasion cave that, during several periods of higher sea level in the last Ice Age, eventually became a tunnel.

The Torghatten mountain is an iconic landmark with its hole right through the mountain, and has been a key touristic site for hundreds of years. Geologically, it represents the most prominent evidence of the sea caves created during multiple ice ages. But the iconic value may be even greater: as a landmark, touristic site and as a key site in the deep mythology connected to the mountains in the region. Kings have carved their names in the walls in the cave, and artists have depicted the sites in centuries. Although there are only one recent international publication about its origin, the iconic and aesthetic values are indisputable global.

The Torghatten mountain is a residual mountain developed in basement granites and nappe gneisses as a part of the strandflat.  The spectacular "hole" is a marine abrasion cave that has broken through the mountain, permitting a view through it from certain position on-shore and off-shore. The hole, together with numerous raised shorelines and smaller caves were formed at high seastands during the Pleistocene.

Torghatten is an example of quaternary landscape evolution. The site displays very well the processes that created the standflat and the numerous residual mountains on it.  The effects of glasi-isostatic changes are very well illustrated through bedrock notches and gravel/boulder beach deposits at various levels (and ages). Torghatten hole itself evidence the extreme efficiency of near-sea level frost-action combined with marine abrasion.