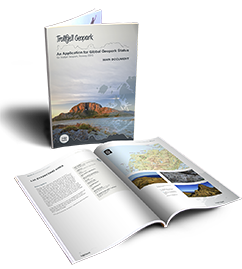 The Norwegian National Commission for UNESCO hereby applies for Trollfjell Geopark to be inscribed on the list of approved UNESCO Global Geoparks.

The area of Trollfjell Geopark is located on the coast in the middle of Norway. It covers six municipalities: Brønnøy, Vega, Vevelstad, Sømna, Bindal (Nordland county) and Leka (Nord-Trøndelag county). The Trollfjell Geopark project is a subdivision of South Helgeland Regional Council, and was officially established on 1 July 2013 with its own budget and accounts.

A geopark is an area with an exceptional geological heritage of international significance, where geotourism, sustainable development and education are at the forefront. The relationship between geological diversity and landscape, biological diversity and human settlement is presented in a geopark. Geopark status does not imply protection, and an important task of a geopark is to promote tourist attractions and sustainable economic activity to the advantage of tourists and local people.

Trollfjell Geopark is a cooperative project between the municipal boroughs of Brønnøy, Vega, Vevelstad, Sømna, Bindal and Leka, and is part of the regional tourism strategy. The geopark aims to provide world­class activities and thrills based on the unique geological history and localities in the area.

Geology is concerned with the formation of planet Earth, of former oceans, drifting continents and the creation and erosion of mountain ranges. In Trollfjell Geopark, geological features reveal exciting events in the geological history of the region. The bedrock displays evidence of an ocean that existed about 600­400 million years ago – the Iapetus Ocean. We can see how it first expanded and then shrank until the continents on either side collided creating a huge mountain range, which in turn was worn down by erosion. The Quaternary geology tells us about ice ages, the movement of glaciers and how the land formerly weighed down by ice is rising from the sea.

The bedrock diversity in Trollfjell Geopark is the basis for biological diversity. Some bedrock is poor in nutrients, resulting in barren mountains, whereas in other areas the bedrock forms nutrient-rich soils that support lush vegetation. Calcareous bedrock results in karst and caves.